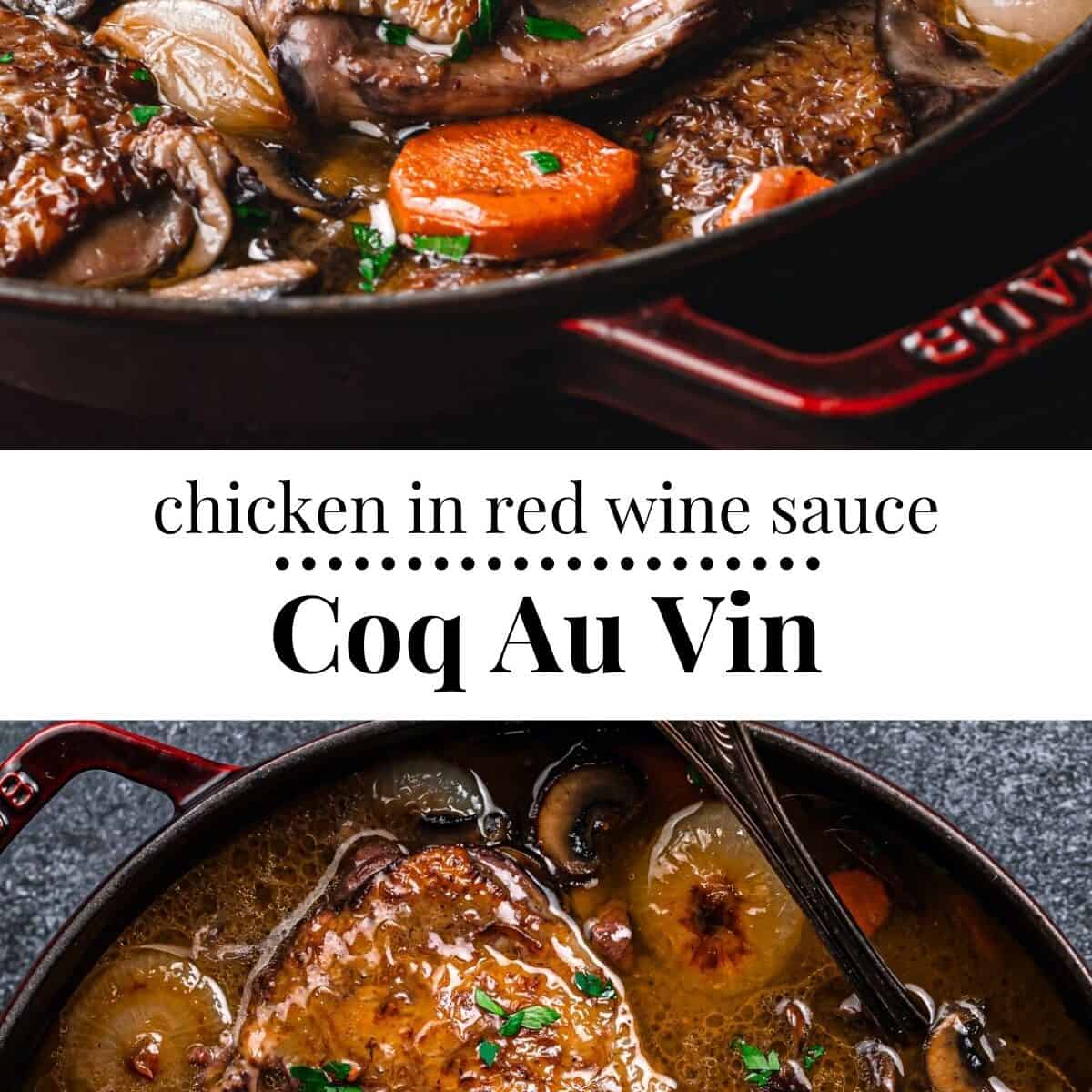 Bring the flavors of France into your kitchen with this Coq Au Vin recipe. This chicken stew is so flavorful! It will impress absolutely anyone and make you seem like a Michelin-Starred Chef at home.

Today, I am going to show you how to make the classic French Chicken in Wine Sauce dish, Coq Au Vin with easy ingredients that you can find in your pantry or at local grocery stores.

Serve it with toasted french baguette, rice, egg noodles, couscous, or any grains or starches you have on hand and you will have the most delicious chicken dinner on the table! Also, check out these CHICKEN CHASSEUR (FRENCH HUNTER’S CHICKEN) and FRENCH ONION SOUP recipes!

What is Coq Au Vin

Coq Au Vin aka rooster in wine is a traditional French chicken dish. The chicken is braised with burgundy or red wine, mushrooms, and lardons in one pot.

The French Chicken and Red Wine dish is a staple at fine dining restaurants and one of Julia Child’s signature dishes featured in her 1961 cookbook Mastering the Art of French Cooking.

About This Coq Au Vin Recipe

This hearty wine-marinated chicken stew is loaded with creamy vegetables and fork-tender meat.

The recipe begins on the stove, slowly cook in the oven, and end on the stove. It requires multiple steps but is easy to follow and definitely worth it!

To make Coq Au Vin, you will need a Dutch oven, heavy-based pot, or cast iron braising dish and the following ingredients:

This Coq Au Vin dish will prove that good food doesn’t have to be complicated or expensive to make.

I intentionally picked an affordable burgundy and cognac and the result was still outstanding. If you have some of those top-shelf and French liquor handy or splurge then please let me know how things turn out!

Now, let’s talk about some of the most important ingredients for Coq Au Vin.

Burgundy: The standard Coq Au Vin usually called for burgundy but any red wine like Riesling could also be used. In this recipe, I used the Carlo Rossi Burgundy, California that I purchased from Ralph's for around $5.99 per 1.5 L.

Cognac: It is brandy, a spirit made from the distillation of wine made in the Cognac region of France. Cognac is often found to be more expensive than other types of brandy. I used the E&J VS Brandy that I purchased from Target for $9.99 per 750 ml bottle.

Use the Right Meat

You can use either chicken legs or thighs or a combination of both. In this recipe, I used Kirkland air-chilled chicken thighs that I purchased from Costco for only $0.99 per pound.

What are Lardons in Cooking:

Lardons are slab bacon that has been cured with salt. The bacon still has the “lard” on and is sliced into matchsticks.

Lardons are commonly used to add flavors to stews or salads. The best alternative options are pancetta or bacon. In this recipe, I used cubed pancetta that I purchased from Trader’s Joe for $3.99 per 4 oz.

How to Make the Perfect Coq Au Vin

First, let’s talk about preparation. Here are some steps that you need to follow.

Next, the cooking process.

Next, the final steps.

First, let it cool at room temperature. Store the leftover in an airtight container and keep it in the fridge for up to 2 days or in the freezer for up to 3 months.

I hope you'll enjoy this Coq Au Vin recipe! If you try this recipe, don't forget to rate and leave a review on the recipe card/comment box below. 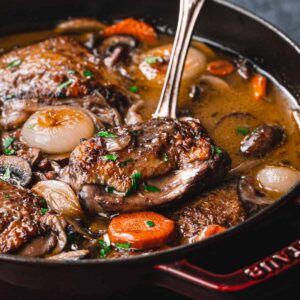 Beurre Manie (To Thicken the Sauce):

Product Used in this Recipe: