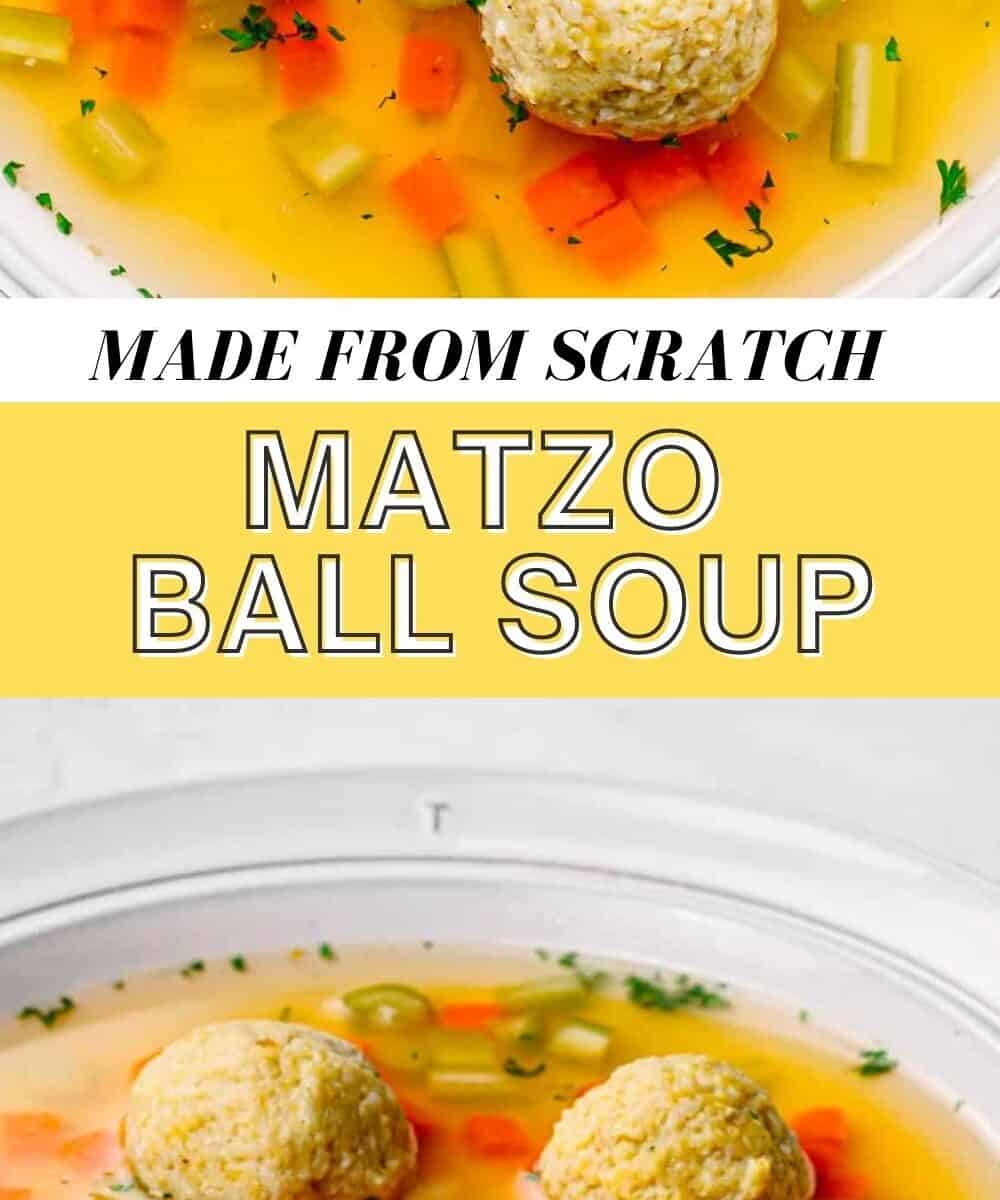 Learn how to make Matzo ball soup from scratch. The matzo balls are so fluffy inside. They are flavored with schmaltz, or chicken fat. Absolutely delicious!

My husband grew up eating Matzo ball soup during passover seders. He joked that some that he had were so hard you'd need a steak knife to cut them, but that his mom's always had the perfect consistency.

When his mom introduced me to matzo balls (also known as Matzah balls) at a Hanukkah dinner I first thought they were some type of light colored meatball. I was shocked they didn't have meat.

I loved the taste and wanted to pile a bunch of Matzo balls into my soup as people do with Asian soups that have meatballs. I then found out that a typical serving has two or three matzo balls.

They're filling but I came back for seconds and knew I'd want to learn how to make this delicious traditional Jewish dish.

About This Matzo Ball Soup Recipe:

These Ashkenazi Jewish dumplings are made from a mixture of matzo meal, beaten egg, broth and homemade schmaltz (chicken fat). They are seasoned lightly with nutmeg and dill to add flavor and aroma to the Matzah balls.

How to Make Schmaltz

Schmaltz is rendered goose or chicken fat, and is used in many traditional Jewish dishes. It's one of the secrets to great Jewish cooking.

Schmaltz is a useful ingredient in matzo balls but I've also used it to make potato latkes, sometimes together for the same Hanukkah dinner. The chicken fat gives a nice rich taste that's similar to butter, but is kosher as it doesn't contain dairy.

Here's how to make schmaltz. I learned this method from Fine Cooking.

Next, use the roasted chicken wings to make delicious broth.

The broth is made from roasted chicken wings. It's a clear broth with a nice golden color that has a rich and flavorful taste.  You can cook broth on the stove, in an electric pressure cooker, or in a crock pot.

Step 1. Transfer the roasted wings into a pot. Cover with 6 cups of water.

Step 2. Cut an onion in half and put the halves into the pot.

Step 3. Simmer the broth slowly at low heat for 4-6 hours on the stove, or 30 minutes at high pressure in an instant pot, or 8 hours at low heat in a crock pot.

Step 4. Strain it through a mesh strainer and discard all the bits and pieces. Also, skim any fat that rises to the top of the broth, transfer it to the bowl of schmaltz and put it in the fridge until solidified.

How to Make Matzo Balls

In a large bowl, combine the eggs, schmaltz, matzo meal, stock, nutmeg, and dill. Season with 1 teaspoon of salt.

Gently mix the mixture with a spoon. Cover and refrigerate until chilled for 30 minutes or up to overnight.

Step 3. Shape the Mixture Into Balls.

With wet hands, shape the mixture into 1- to 1 ½-inch balls (about the size and shape of a ping-pong ball).

Add diced carrots and celery into the broth. Add more water if necessary. Season with salt and pepper to taste and bring the soup to a boil.

Gently drop matzo balls into the broth. Cover the pot, simmer on low heat for about 30-40 minutes for al dente, or longer for lighter texture.

Alternatively, you can cook the matzo balls in plain water until al dente then serve with broth.

How To Store Leftover Matzo Balls:

Make sure that you store the soup and the matzo balls separately. The leftover matzo balls last up to 3 days in the fridge or up to 3 months in the freezer. 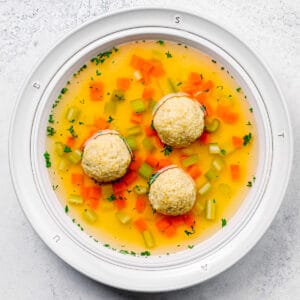 If you don't have time to make your own Schmaltz, you can substitute it with vegetable oil. Also, you can skip steps #1 and #2 by using a pre-made broth (about 6-8 cups) to speed up the cooking process.