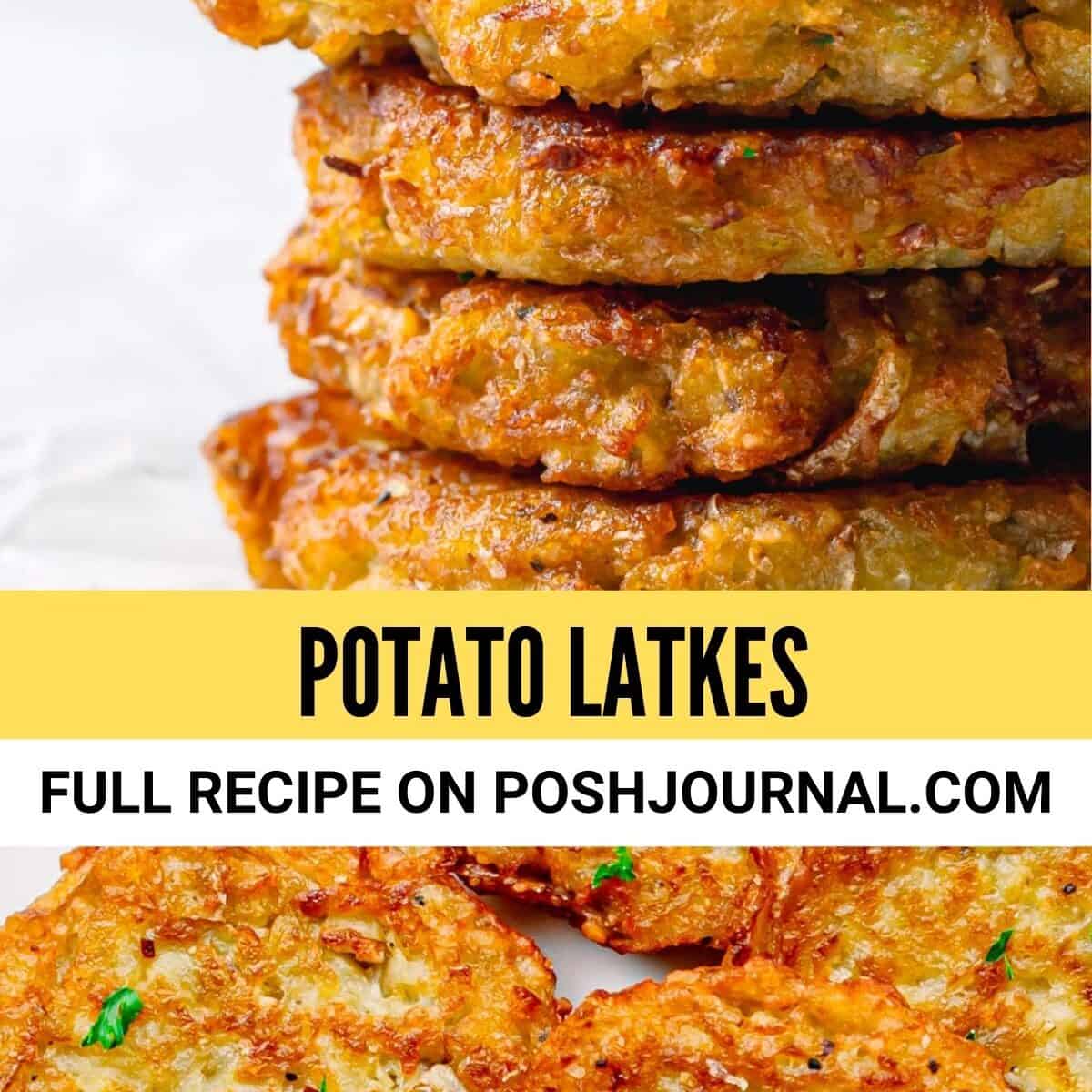 In celebration of Hanukkah, I want to share my favorite way to make Jewish potato pancakes, also known as latkes. This potato latkes recipe is so easy to follow! The latkes have a crispy exterior and a light, tender inside. So delicious!

Whether potato latkes are a traditional food in your house or not, it can quickly become one. The sizzling sound when making them.  The taste that pretty much anyone and everyone enjoys.

The all-important decision of whether to eat potato latkes plain, with applesauce or sour cream. Latkes are quick to make but almost a fun little ritual for it in the kitchen.

Also, check out this BRAISED BEEF BRISKET (HOW TO COOK TENDER BRISKET IN THE OVEN) recipe.

One important thing to remember with potato latkes is that with my recipe or any others you may want to make many more than what’s recommended.

My son who is only 10 can and will eat a serving size that would be recommended for an entire family. They’re also tasty to eat any time of day, so better to make more and just assume they’ll get noshed on throughout the day!

How To Make Perfect Potato Latkes Every Time:

You can use either Russets or Yukon gold potatoes. There is no need to peel the potatoes. Just be sure to give your potato a good rinse under running water before grating.

Eggs and matzo meal work as binder agents that can help a mixture hold its shape.

Matzo meal is used as a substitute for flour or breadcrumbs during Passover. It's made by grinding matzo, a traditional Jewish unleavened bread.

If you don't have access to Matzo meal, you could substitute it with flour or skip. If you're Jewish and want to keep Kosher for Passover, or just want to keep the recipe in its most traditional form then Matzo meal is a great way to go.

On a similar note, schmaltz is an alternative to cooking oil to keep in-line with traditional Jewish ingredients. I strayed from this and just used regular cooking oil in my latke recipe.

Potatoes are loaded with moisture, which makes browning difficult. You need to release as much liquid as possible before they're cooked.

Here's how to remove the excess liquid from potatoes in simple ways.

Step 1. Spin the grated potatoes and grated onion in a salad spinner until barely any water comes off from the mixture.

Step 2. Wrap the shredded potatoes and onion in a kitchen towel, then squeeze to release as much liquid as you can.

Step 3. (Optional). Let the excess liquid settle, then pour off most of the liquid to leave behind the potato starch. You want to use potato starch as a binder and add it into the latke mixture.

How To Make Latkes from Scratch:

Step 1. Prepare the Potatoes and Onion

Use your hands to form the mixture into 12 patties.

In a large skillet, heat a ¼-inch layer of oil until shimmering over, medium-high heat. Fry the latkes for about 3-4 minutes on each side or until the edges of the latkes are crispy and brown.

Transfer the fried latkes to paper towels to drain, then transfer to a platter.

How to Cook Latkes in an Air Fryer:

Cook these latkes in a preheated air fryer at 375°F. Spray the tops of the latkes with cooking spray and cook for about 12-16 minutes.

Be sure to work in multiple batches. Also, don't forget to rotate the tray halfway through.

Please note that air fryer cook times can vary based on wattage and the amount of food you cook.  You may need to adjust the time or cooking temperature.

You can make ahead up to a day. Chill and put the latkes in an airtight container. To reheat, simply put latkes in a single layer on unlined baking sheets. Bake in the oven at 350°F for about 10 minutes or until crisp.

How to Store Leftover Potato Pancake:

First, let the latkes cool at room temperature but no longer than 2 hours. After it is completely cool, wrap the potato pancake with plastic wrap, and transfer it to the refrigerator.

Properly stored, latkes will last for up to 2 days in the refrigerator or up to 2 weeks in the freezer.

What To Serve with Latkes

You can serve latkes with sour cream, apple sauce, or smoked salmon.

Check Out These Tasty Appetizer Recipes: 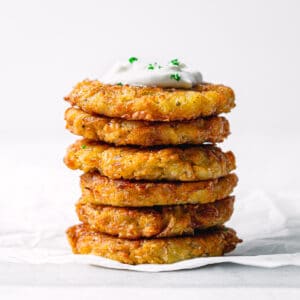