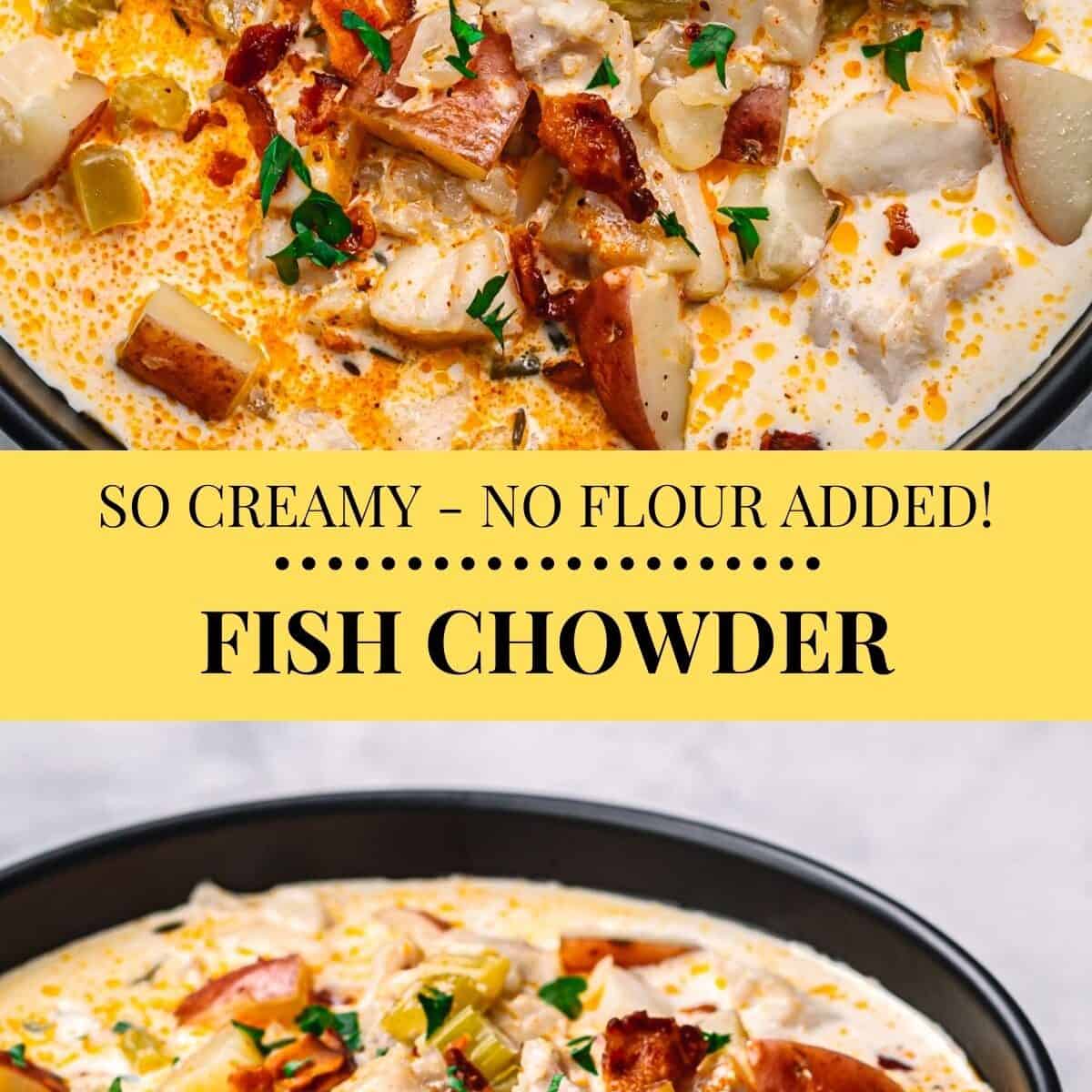 Here's another great fish soup recipe to make this cold season and all year round! This fish chowder is the easiest restaurant-style seafood soup you can make at home. It is absolutely delicious!

Today, I want to share one of my favorite fish stew recipes of all time! This easy fish chowder recipe is so full of flavorful nutrients. It's so simple and easy to make. It takes less than an hour to make, from the start to finish!

This was inspired by this popular fish soup recipe on this site, and pairs well with these potato cheese balls.

This hearty fish chowder soup delivers a big bowl of comfort but is not too heavy. The broth is so creamy, silky, and rich in flavors. It has a perfect consistency, not too thick and not too thin, very similar to New England chowder. I think you are going to love it!

To make this delicious fish chowder, you will need the following ingredients:

The Best Fish for Fish Chowder

You can use any meaty and firm type of fish, such as cod, haddock, pollock, Pacific rockfish, grouper, snapper, tilapia, bass, or catfish.

Be sure to stay away from delicate fish, like sole or flounder because the meat tends to fall apart in the soup, or oily fish like tuna.

This soup is thickened with natural starch from potatoes instead of flour.

Depending on your preference for consistency, you can use either Russet, Yukon, or red potatoes. Just remember that you will be making a fish chowder, and the fish should be the star ingredient instead of the potatoes.

In this recipe, I used red potatoes with skin on. Red potatoes have a nice bright red color, and a firm, and waxy texture. And because they are high in moisture and low in starch, they will hold together better after cooking. Use this type of potato if you want to keep the potatoes from getting mushy in soups.

Alternatively, you can use Yukon or russet potatoes.

The all-purpose russet potatoes aren't firm or waxy like red potatoes. They will soak up the liquid and lose their shape in soups because they are high in starch and low in moisture. Use russet potatoes if you want a creamier, thicker, and richer broth.

Yukon Gold potatoes are on the medium-starch side and they will hold their shape better than russet potatoes in soups.

I am a big fan of clam juice and always keep it in stock in my pantry.

Because clams are naturally rich in glutamates, it works great as a flavor enhancer in foods, such as stews and soups. Also, clam juice is the perfect replacement for fish stock in any recipe, from pasta to chowder.

I use bacon to enhance the flavors of the fish. It also adds a smoky and savory taste to the broth. And for me, a little bacon will make everything tastes better.

In this recipe, you are going to render bacon fat for a few minutes. After that, use the bacon grease to saute the onion and celery then use the crispy crumbled bacon as a topping.

Dry white wine can enhance the flavor of a dish and is commonly used to deglaze a pan.

As a general rule, cook only with wine that you'd drink and it doesn't have to be expensive! If you don't have any white wine on hand or simply want to avoid any alcohol, feel free to skip it!

This seasoning mix includes celery salt, black pepper, crushed red pepper flakes, and paprika. You can use this seasoning mix to add flavors to many recipes, from seafood chowder/stew to fries.

Can I substitute the heavy cream in the soup? Of course!

You can substitute an equal amount of heavy cream for half-and-half or whole milk with extra butter, coconut milk, or evaporated milk.  Heavy creams contain fatter than half-and-half-creams and are also more resistant to curdling. Therefore, heavy cream would make a better choice in soups and sauces.

How to Make Fish Chowder:

The preparation and cooking process is pretty simple. So, here are some important steps to follow:

I hope you'll enjoy this recipe and share it with friends! If you try it and don’t mind, please leave me a comment and/or give this recipe a rating. 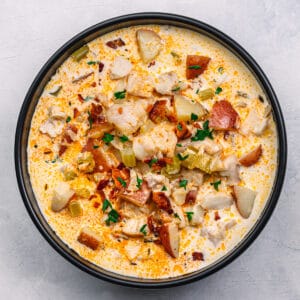 Rika
This hearty fish chowder soup delivers a big bowl of comfort but not too heavy. The broth is so creamy, silky, and rich in flavors. It has a perfect consistency, not too thick and not too thin, very similar to New England chowder.
Print Recipe Pin Recipe
Prep Time 15 mins
Cook Time 40 mins
Course Main Course
Cuisine American
Servings 8
Calories 573 kcal