Cheesy hash brown casserole recipe made from scratch. This casserole is so filling and delicious. It's a staple holiday dish and the perfect breakfast or brunch item to feed a crowd.

A very easy hash brown casserole recipe made with real ingredients and no canned soup! It's the best hash brown recipe that you can prepare ahead, but it can also be made on the same day!

I have nothing against canned soup; it's actually a staple pantry ingredient that can transform a simple dish into a satisfying meal.

Instead of using canned soup, I made my own white sauce, also known as béchamel. I also added a small amount of bouillon to add chicken flavor to the sauce.

Béchamel is one of the popular sauces in classic French cooking. It's so versatile and can be used in just about any recipe that requires canned soup as one of the main ingredients. It is so easy to make and at a fraction of the cost of canned goods.

This funeral potatoes casserole is so easy to make. I recommend assembling the casserole the night before and cook it the next day.

However, If you are short on time, you may prepare, assemble, and bake it on the same day.

You should thaw frozen hash brown before cooking. This extra step allows you to remove the excess moisture and to ensure the hash browns cook evenly.

Melt butter in a medium-sized saucepan over medium-high heat. Add onion, cook until soft and translucent for about 3-4 minutes.

Add flour, cook, keep stirring for about 2 minutes or until it smells toasted.

Whisk in the broth, milk, garlic powder, black pepper, and chicken bouillon. Cook, whisking frequently until thickened, about 4-5 minutes. The sauce should be smooth, velvety, and as thick as condensed soup.

Remove the casserole from the refrigerator about 30 minutes before cooking. Sprinkle with ½ cup of cheese and/or with any topping of your choice, such as corn flakes with melted butter.

How to Store Leftover Funeral Potatoes:

First, let the casserole cool at room temperature but no longer than 2 hours. After it is completely cool, store it in an airtight container, or cover the baking dish with plastic wrap or foil, and transfer it to the refrigerator.

Properly stored, potatoes casserole will last for 3 to 5 days in the refrigerator or up to 3 months in the freezer.

HOW TO REHEAT FROZEN CASSEROLE 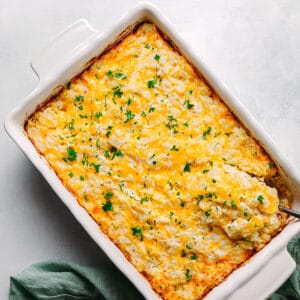 Rika
A tasty hash brown casserole recipe made with real ingredients and no canned soup! It's the best hash brown recipe that you can prepare ahead, but it can also be made on the same day!
Print Recipe Pin Recipe
Prep Time 15 mins
Cook Time 50 mins
Course casserole, Side Dish
Cuisine American
Servings 10
Calories 371 kcal

If you are short on time, you may prepare, assemble, and bake the casserole on the same day.