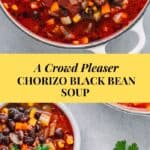 Make this chorizo soup tonight! It's so delicious and easy to make. The Mexican chorizo adds a smoky, garlicky, and fiery flavor to the soup. A simple, crowd-pleasing soup recipe to warm up your winter and is a hit recipe for game day!

A hearty bowl of soup is great for a chilly night. It's loaded with nutritious vegetables and has high-in-fiber black beans. This comforting chorizo soup is the perfect one-pot meal to feed the whole family (my kids just love it!).

This chorizo soup tastes pretty similar to chili and a bit like minestrone. It has just the right amount of broth, not too thick but not too thin. The soup is so flavorful. It has a great balance of meat, beans, and vegetables all in one pot.

The broth has a vibrant red-orange hue color. Even though this soup is loaded with aromatic spices, it's not considered as a "spicy" soup. It’s a simple soup recipe that anyone can enjoy even small kids. That being said, you can always adjust spice levels up or down based on preference and audience.

Chorizo sausage is available in many grocery stores. It usually comes in varieties of flavors to choose from, such as beef, pork, chicken, and turkey. No matter the variety they almost always have a lot of flavors, which makes it a favorite for me and my family.

Beans are packed with protein, fiber, vitamins, iron, and potassium. I used black beans because they go well with Mexican spices.  I also like the consistency of black beans.

My husband and I are on a kick to add more beans to our recipe and it’s been a fun journey.  I think that as a whole Americans need a lot more beans in their diets, and will be surprised at how much better a recipe tastes with beans added in.

For this recipe, I just used canned black beans that have been washed and rinsed prior to adding to the soup. By using canned beans, I was able to reduce at least one hour of cooking time. 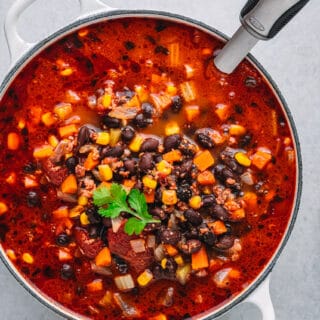