A delicious homemade Chinese deep-fried chicken dish that tastes like (or even better than) the best Chinese restaurants or take-out. Try this easy General Tso's chicken recipe today. You won't even believe that this Asian dish came straight out of your kitchen!

Today, I am going to share the best General Tso's chicken recipe! Skip the Chinese take-out and Uber Eats food delivery orders. You can make this Chinese deep-fried chicken dish with simple Asian ingredients and condiments that you can find in your pantry or local grocers. This General Tso's chicken is a dish consists of deep-fried chicken breast with a sweet and savory Asian stir fry sauce. It's so easy to make, and is tasty and addictive!

What is General Tso's Chicken:

General Tso's chicken is one of the most popular dishes at Chinese restaurants in North America. It tastes similar to Orange chicken but is spicier and zestier. In addition, General Tso's chicken uses dark caramelized sauce.  As a result, the meat looks darker than Orange Chicken. The dish is named after Zuo Zongtang (also romanized Tso Tsung-t'ang), a Qing dynasty statesman and military leader from Hunan province. Interestingly, General Tso's chicken is not one that is eaten in China (but hey, if it’s good it’s good, right?).

How spicy is the General Tso's chicken? The chilies add a nice kick to the dish but I don't consider this as spicy food.

Let's start with the protein. In this recipe, I used chicken breasts instead of chicken thighs as the main ingredient. I find it easier to work with chicken breasts because they simply cook faster than dark meat (thighs).

Some people prefer the taste of dark meat over white meat, and consider it to be more tender and flavorful. Both chicken thighs and breasts are good sources of lean protein. So it's up to you which type of chicken meat to use while making this dish.

Now for the sauce. The sauce is made from a combination of dark soy sauce, light soy sauce, Sriracha, Thai Sweet Chili sauce, Chinese black vinegar, Shao Xing wine, chicken broth, and white sugar. You can find most of these Asian seasoning ingredients at any grocers. If not, don't worry because, on the recipe card below, I will include some alternative ingredients to use.

How to Make General Tso's Chicken

The preparation and cooking process of this recipe isn't complicated. Basically, there are five important steps:

Anybody can cook this dish. There is no special cooking skill required. However, you will need a good wok or non-stick pan, a pair of chopsticks, paper towels, and a pair of tongs.

Don’t forget to come back, rate and share your opinion about this recipe so other readers can read it! 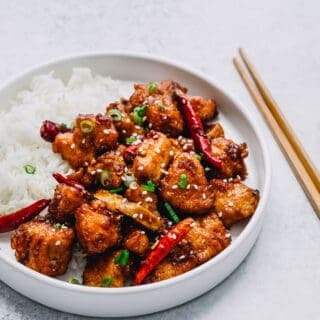