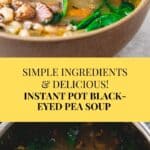 This Instant Pot Black-Eyed Pea Soup is a great comfort soup for chilly days. The soup is cooked for only 15 minutes in a pressure cooker, using simple ingredients that you can easily find in your pantry. A great instant pot soup recipe that anyone will enjoy.

This instant pot black-eyed pea soup recipe uses smoked ham hock to create the rich broth for the soup. It's naturally gluten-free, freezable, packed with veggies and flavors! This bean soup recipe is suitable to freeze for 1 month.

This soup recipe is the perfect addition to your weekly menu plan because it's so delicious and easy to make. The cooking process is very simple and quick because we are going to cook the dried beans at high pressure in an instant pot or pressure cooker for only 15 minutes. Generally, cooking beans or bean soup can take an hour (or even longer) on a stove.

Soaking is a very common way to prepare beans before cooking. This process usually takes at least 4 hours or up to 12 hours. Soaking beans before cooking helps to remove some of those indigestible sugars that are responsible for beans' infamous digestive issues. Soaking will also help to reduce cooking time.

If you don't have any digestive issues caused by beans, this instant pot black-eyed peas recipe will be perfect for you.

Cooking beans using an instant pot can help to reduce your cooking time tremendously. In this recipe, I didn't soak the beans prior to cooking and it only took me about 15 minutes to get the perfect result!

The soup is made with simple seasoning yet is so flavorful! The broth is seasoned and infused with onion, garlic, carrot, celery, thyme, apple cider vinegar, black pepper, bacon, and smoked ham hock.

This soup is very filling and can be served as a full meal. It's also very inexpensive to make.

Now Let's talk about some of the main ingredients!

Black-eyed peas (aka black-eyed beans) are common ingredients used in Southern cooking. The peas are usually cooked with a pork product such as bacon and ham bones (or ham hock). It's often served on New Year's day to bring prosperity or good luck in the new year.

You can easily find black-eyed peas in any grocery. It’s usually available in dried form or canned. After making this soup, I think black-eyed peas have become one of my favorite beans to cook. I can't wait to make more recipes using black-eyed beans on soup, stew or salad.

Ham hocks are traditionally used to flavor Southern classics like black-eyed peas and collard greens. Ham hock adds rich flavor to bean soups and if they are smoked it shouldn't taste too porky.

For this recipe, you will be using just one medium-size smoked ham hock, which is around ¾ of a pound each.

I used about 4 oz of thick-cut bacon to add flavor to the soup. In this recipe, I cooked the bacon first so I can use the grease to cook the other ingredients for the soup base. No additional oil needed!

To make the broth, I used a combination of onion, celery, carrots, and garlic. And to intensify the flavor, I added some thyme, apple cider vinegar, black pepper and bay leaves. 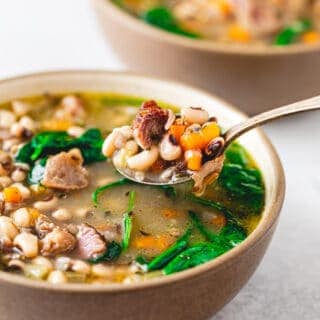 Cook the Soup Base:

#1 If you don't have any low sodium chicken broth/stock in your pantry, feel free to use about 3 cups of regular chicken broth/stock with 2 cups of water and highly recommend using a low-sodium bacon instead of the regular bacon.  #2 If you are planning to use collard greens, you may want to add this ingredient at the beginning and cook it with the other ingredients at high pressure for 15 minutes. For kale or swiss chard, follow the same direction as above.