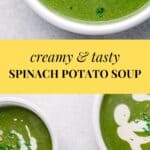 A comforting creamy spinach potato soup, made with simple ingredients. The soup is so creamy, rich, and delicious. Anyone can make this one as it’s a simple soup recipe for any weeknight, especially on chilly days.

Craving for some cream of spinach soup? Try this creamy spinach potato soup as it has a flavor combination that’s even better. This soup is made with real ingredients and is very filling and nutritious!

This spinach potato soup is also gluten-free! It's made with just a handful of healthy, affordable, and real food ingredients!

This creamy soup is made with fresh spinach, Yukon gold potatoes, broth, onion, garlic, heavy cream, and the optional cheddar cheese. It's very easy to make and inexpensive.

This recipe is very customizable. It is possible to make this creamy spinach soup totally dairy-free or WFPB compliance. The soup tastes good with or without heavy cream or cheese.

Spinach as a Healthy Soup Ingredient:

In this recipe, I used fresh baby spinach leaves. However, frozen spinach can also be used as an alternative. This dark leafy green is important for your skin, hair, and bone health. It also provides protein, iron, vitamins, and minerals.

Which Potato to Use in Creamy Soups:

I highly recommend using Yukon potatoes for this recipe. Other potatoes like Russet and red potatoes can also be used. Yukon gold potatoes are slightly sweet with a smooth and slightly waxy texture. They are incredibly versatile and inexpensive.

I added the heavy cream to thicken the soup, and to add a rich, milky flavor. As I mentioned above, this soup tastes delicious with or without heavy cream. 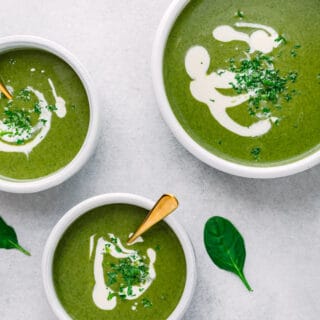 If you are using low sodium broth, you can skip the water and use 3 ½ cups of low sodium broth instead. Adjust seasoning with salt and pepper according to your taste. *The nutrition facts below didn't calculate the optional cheese.